A General History of Clan Forsyth

On St. Andrew’s Day 1978, the Lord Lyon, King of Arms, once again recognized Clan Forsyth as one of the old, whole name Clans of Scotland. Alistair C.W. Forsyth of that Ilk, Baron of Ethie officially became our Chief.

For over 300 years the Clan was unrecognized. The Forsyths had entered historical darkness around 1650 when Cromwell’s ships carrying records of all the Clans as spoils of war, sank off Berwick on Tweed. The then chief failed to re-establish his claim to the name and his Armorial bearings when Charles II instituted a public register of Clans in 1672.

Interest in reviving the Clan began in the early years of the Twentieth Century with the formation of a Forsyth Family Association in Glasgow, Scotland. The ultimate achievement came in 1978 when the Lord Lyon of Scotland accepted the claim of Alistair C.W. Forsyth, Baron of Ethie, the rightful candidate, to be Chief of Clan Forsyth.

Alistair received the nomination because his family genealogy traced back fifteen generations to a Fife laird, Andrew Forsyth, who lived near Falkland, where it is known that in the 16th century Forsyths were courtiers of the Scottish Kings at Falkland Palace. It was therefore appropriate that the formal inauguration of Chief Alistair be held in Falkland Palace.

The first documented presence of the Forsyth name in Scotland was the signing of the ‘Ragman Roll’ in Berwick on 28th August 1296 by Robert de Fauside. This roll was the instrument by which some 20,000, comprising the landed nobility of Scotland, were compelled to subscribe allegiance to Edward I of England after the failure of William Balliol to defeat the English.

It must be understood that at this time most of the official documents of ancient Scotland had been taken south by the English and much of this very valuable material was lost or destroyed. Thus there are gaps in the historical records of many families as well as the Forsyths.

The next record is of Osbert, son of Robert de Forsyth, who received a grant of part of the lands of Sauchie in the Sheriffdom of Stirling from Robert the Bruce. Osbert fought against the English at Bannockburn and his land charter was confirmed in 1320. Osbert’s son Robert was appointed King’s Macer in 1364 and Constable of Stirling Castle in 1368, he died in 1370. 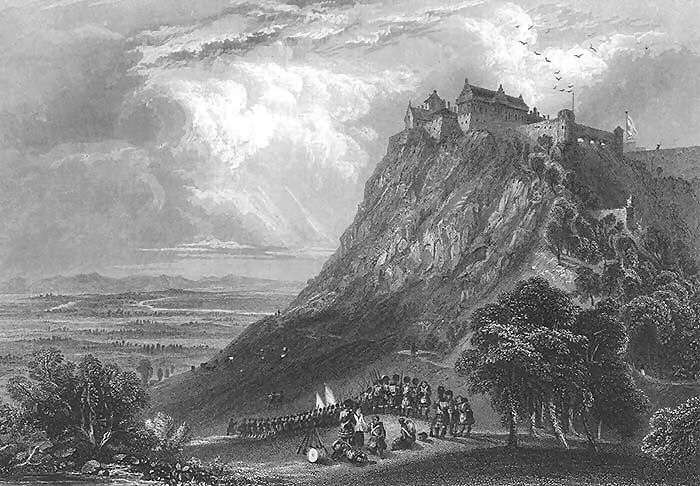 In 1364 the accounts of the ‘Customers’ of Stirling were rendered by Fersith the Clerk who was probably Robert’s brother and who was granted ú100 per annum from the lands of the Polmaise Marischal by Robert II. In 1418 Robert Forsyth rendered the accounts of the Burgh of Stirling and in 1432 his son Robert became a Burgess of the city and a Bailie in 1470. Duncan and David Forsyth became Burgesses in 1479 and descendants of the family settled in Stirling and held Civic office until modern times.

To Dykes in Lanarkshire

Before 1488 David Forsyth, Burgess of Stirling, bought the lands of Dykes, otherwise known as Hallhill, near Strathaven in Lanarkshire. The ancient castle, which had stood from before that time, fell into ruin and was demolished in 1828. In 1540 the family left Dykes and moved to Inchnoch Castle in Monkland, Lanarkshire.

It was this family that subsequently set up branches of the Family in Ayrshire, Aberdeenshire, Glasgow, North America and Australia.

David Forsyth was a Burgess of the city in 1478 and in 1487 Dom Thomas de Forsyth, Prebendry of Glasgow, endowed the chapel of Corpus Christie in the Cathedral. There are continuous records of the family as merchants and Burgesses of the city through the 16th, 17th, and 18th centuries. It was from Glasgow that members of the family settled in Argyllshire and Dunbartonshire and emigrated to Ulster, the Americas, South Africa and Australia.

Nydie, near St. Andrews in Fife, was a Barony under the superiority of the Archbishop of St. Andrews, Henry Wardlaw, when the lands were purchased by William Forsyth in 1435. His son, Henry was beadle of St. Andrews University from 1456 to 1461. In 1484 Alexander, the fourth Laird was appointed Sheriff-Depute of Fife and sold the family lands at Foulford in Edinburgh in 1491. Armorial bearings were granted to him in 1492 by the Lord Lyon, Sir James Balfour. Alexander Forsyth died at Flodden in 1513. His grandson James married Elizabeth Leslie before 1520. Elizabeth was grand- daughter to George Leslie, fourth Earl of Rothes, and great grand-daughter of King James III. In 1523 the superiority of Nydie was transferred to the Earl and the fortunes of this branch of the Forsyth Family became closely tied to those of the Leslies.

Descendants of this branch of the family are believed to have continued living in Fife to the present day and are represented in the Forsyths at Falkland who have a documented history from before 1607. Our present Chief, Alistair Forsyth of that Ilk, has connections with Falkland where his family resided as Lairds at the end of the 16th century. There are records that show a Family of Forsyth, believed to be the ancient Chiefly line that had been associated with the Royal House of Stewart and Falkland Palace since the end of the 14th century. From Nydie, branches spread to Dundee and up the east coast to Aberdeen. Descendants are living today in North America and New Zealand as well as other parts of the United Kingdom.

The earliest record here is the sasine of Gilcamstoun in 1456 to David Forsyth who was believed to have moved north from Edinburgh. Later his grandson died with King James IV under the King’s standard at Flodden Field. William Forsyth was the Member for Forres in the Scots Parliament of 1621. Settlement in the North- East took place around 1508 when Alexander, son of David Forsyth of Dykes, settled near Monymusk where anciently his feu was known as ‘Forsithsland’. From him probably descended the Rev. Alexander John Forsyth, who was the inventor of the percussion lock which advanced musketry in the 18th century and earned him a pension from the crown. In the 18th century settlement is documented from the North-East to Canada and the Americas.

By the 16th century Forsyth was a recognized Clan with its own Chief. At the time of Oliver Cromwell’s escapades in Scotland, many of the Scottish Records were lost and as a result, re-registration was necessary some years later. This took place between 1672 and 1676 and our Chief failed to register.

For 300 years there was no Chief and no Chief meant no Clan. During this time, the Family of Forsyth grew and spread worldwide. Today there are Clan Forsyth Societies in Australia, Canada, the United States of America, New Zealand and of course, our Parent Society, Clan Forsyth Society of Scotland with its branches covering England, Wales and Northern Ireland.