On Saturday 25th July 2015 a “General meeting” was held to discuss the “Special Resolution” to consider the question of incorporation for the Clan Forsyth Society of Australia (Queensland Branch). The quorum of members who attended have voted unanimously in favour of changing the legal structure of the organisation to an incorporated association under Queensland law.

In addition to this advise the Clan President in Queensland also advised by post a personal message from Val Ashton, regarding the reason that she believed it was necessary for the Clan to make these substantial changes to the Clans structure.

After almost two hours of discussion on the topic, the meeting approve the adopted the resolution unanimously and the President instructed the Secretary Mr Len Forsyth to prepare and application for immediate lodgment with the Queensland Department of Fair Trading (DOFT), for the Incorporation of the Society.

A full copy of the Society’s application for Incorporation can be view here.

In addition to lodging our application with the Queensland Department of Fair Trading (DOFT) to incorporate our association, the meeting also resolved two additional items:

Full details of the outcome of this meeting; the new model constitution and the update of the Branch’s objectives, have now been advised for the benefit of current and potential members on the Clan website at:

Our application was submitted last Monday in Ipswich and processed on 29th July by DOFT in Brisbane. I spoke with the Brisbane office by phone on Tuesday to clarify our relationship to the Clan Forsyth Society of Australia. I was told I would be advised by phone or post as the application progressed. 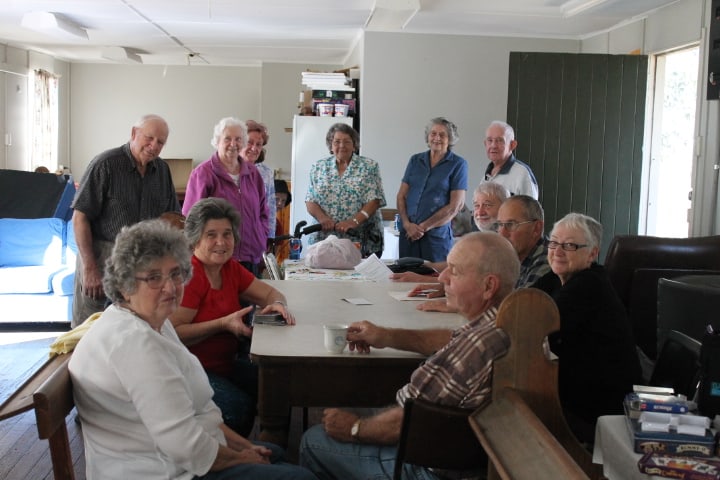 In moving to an incorporated association we had hoped to cause the least disruption possible by simply adding the abbreviation “Inc.” after our existing name.
This however was not possible and in a response from DOFT was received on Friday 31st by post, regarding our application and their assessment, it was explained that the use of the word “Branch” in our name is somewhat of a stumbling block and a possible permanent impediment. This was because the Australian Society, to which our name infers we are a branch of, remains an unincorporated body.

I had previous argued in the initial application that the Queensland Branch was a wholly autonomous body that was affiliated in name only with “Clan Forsyth Society of Australia”, which referred to what was essentially the NSW branch of the Society and that we had for the last 35 years simply used the term “Queensland Branch” to differentiate ourselves from NSW and any other State branches.

It was argued that we as group performed the following:

The following was also similarly true:

However, after making this submission, it would appear that this explanation has been rejected in that despite our use of the word branch in our name for the last 35 years, that for us to become incorporated in Queensland, we cannot infer by name, that we are the branch of any Australian body if the parent body (the NSW branch) is unincorporated.

The use of the word “Branch” is a reserved legal term in much the same way terms such as “Limited” or “Company” are similarly reserved in their usage.

We enquired if something similar to – “Clan Forsyth Society of Queensland Inc.” would be OK and we were advised that it would and that I should now just come up with two other an email him them over the weekend, and it would be attended to first thing on the following Monday.

Granting of Incorporation to our Association.

After we submitted the above name along with two other alternatives our application to incorporate was approved the following Friday and on 7th August 2015, the Department of Justice issued a Certificate of Incorporation. 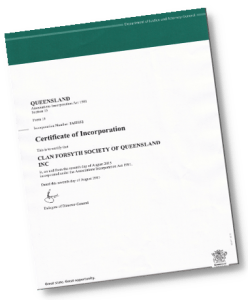 A copy of this certificate can be found at the following address:

Addition details of this process may also be found on the home page at: